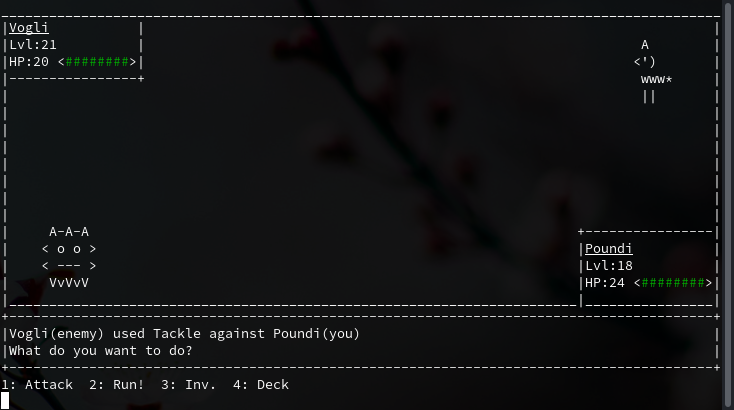 Pokete is a small terminal based game in the style of a very popular and old game by Gamefreak.

For Linux, BSD etc. just do this:

You can also install it from the AUR:

Or you can just run the AppImage from the release page.

NOTE: In that case you first have to create the ~/.cache/pokete/ folder.

Some windows antivirus may flag the libplaysound.dll as malicious. If pokete crashes, please make sure that the .dll exists and is not in quarantine!

If you have problems with your ARCH you maybe need to rebuild the audio module, see here.

The game can be run normally without supplying any options. For non gameplay related usage, use --help. Try it out online.

Imagine that you’re a Pokete Trainer and you travel around the world to catch/train as many Poketes as possible with the ultimate goal of becoming the best trainer.

First of all you get a starter Pokete (Steini), that you can use to fight battles with other Poketes. Use W, A, S and D to move around.

When entering the high grass (;), you may be attacked by a wild Pokete. By pressing 1 you can choose between the attacks your Pokete has (as long their AP is over 0). By pressing the according number, or navigating with the * cursor to the attack and pressing Enter you can use the attack selected. The wild Pokete will fight back, but you can kill it and gain XP to level up your Pokete. If you would like to catch a wild Pokete, you must first weaken it and then throw a Poketeball. With a bit of luck, you can catch it and have it fight for you.

By pressing the 1 key, you can take a look at your current deck. You can see detailed information of your Pokete and your attacks, or rearrange them. Changes will only be saved by quitting the game using the exit function.

Since you’re a Pokete Trainer, you can also fight against other trainers (they appear as an ‘a’). He will start a fight with you when you get close enough to him. You can not run from a trainer fight; you either have to win, or lose. These trainer fights give double the XP.

When one of your Poketes is too weak or dies, you can heal it by going into the Pokete Center (the house), talk the the person there and choose the healing option. Here you can also take a look at all of your Poketes, and not just the six in your team. The ones marked with an o are the ones in your deck.

By pressing e, a menu will appear where player name, and later other settings, can be changed.

The red balls all over the map are Poketeballs. You’ll need these to catch Poketes. Stepping on such a ball will add it to your inventory.

See How to play.

For additional information you can see wiki or the multi-page wiki.

Mods can be written to extend Pokete. To load a mod, the mod has to be placed in mods and mods have to be enabled in the menu. For an example mod see example.py.

Pokete depends on python3 and the scrap_engine module. On Windows pynput has to be installed too.

Feel free to contribute whatever you want to this game. New Pokete contributions are especially welcome, those are located in /pokete_data/poketes.py

To learn how to add more poketes/types/attacks to the game, see the development guide

to regenerate the wiki and adding them to it.

If you’re experiencing problems on Japanese systems take a look at this.